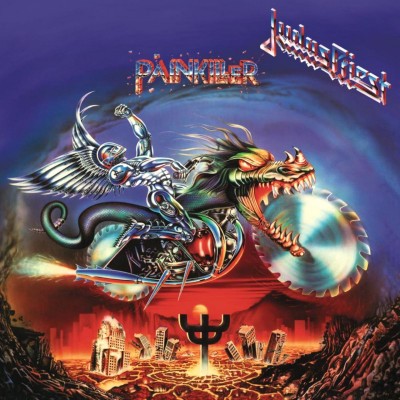 Megametal
The Best Metal Albums of Each Year Since 1980

Ragnaröcker   100/100
Date :  Jan 11, 2023
Judas Priest are one of the most important bands in the history of metal. They exist since the 1970s and have influenced thousands and thousands of acts. Yet the pinnacle of their career coincides with a record released just in 1990, probably the most extreme and heavy of their entire discography.

It obviously is Painkiller, one of the most powerful albums in the history of music. In facts, while the first records were still quite "delicate", while remaining metal, this is the musical version of taking a hammer to the teeth.

To confirm this, the titletrack starts with Scott Travis pounding the drums and a nice riff, not particularly fast but pressing and completely devastating. There is not a moment of rest for the whole song, which runs for six minutes between rapid solos, apocalyptic scenarios starring the splendid metal angel portrayed on the famous cover and Rob Halford demonstrating all of his vocal power with absolutely perfect screams. There's a reason it's a metal anthem now. Hell patrol is slower and perhaps more catchy and controlled but equally engaging, as well as a second magnificent opportunity to admire the band's technique, and All guns blazing, another fast and violent piece, in just three minutes destroys the listener's resistance to the power of metal.

Lether rebel is the most melodic song, although characterized by rapid verses, a bombing bridge and an explosive refrain, but it is just the calm before the storm. Metal meltdown, track number five, is, as you can guess from the name, even more destructive than Painkiller. After a very technical initial solo, the descent into molten metal begins (and Halford almost breaks through the sound barrier with his vocal prowess). Night crawler is introduced by a disturbing choir and proceeds with a full-blown horror atmosphere created by distressing riffs, a scratchy voice and a spoken interlude that describes the physical and psychological sufferings of a monster's unfortunate victims.

Between the hammer and the anvil is more regular, but the riff is still perfect, fast and suspended between hardness and melody, the drums really look like a hammer that beats on an anvil and the voice, as well as being powerful as usual, provides other vocalizations which are certainly enviable. The start and end are very peculiar, slow and oscillating, perfect to create expectation. A touch of evil begins wonderfully with the tolling of a bell and a rather gothic keyboard sparkle and continues even better with a mid-tempo with sensual and desperate tones. Battle hymn lasts less than a minute, but it is slow, solemn and bewitching enough to lead to the final piece, One shot at glory. The latter is the closest thing to a power metal song that has ever been inserted in a record of another genre, with lots of epic and warlike lyrics, and it is perfect thanks to the mixture of speed, melody and aggression.

The line-up is the classic one and you can hear it. After all they are musicians of the highest level, among the best of the last fifty years, and in this album they really show off all their skills, both in terms of technique and of expressive ability. Few releases can make understand what metal really is in its purest essence and Painkiller is one of them.

In addition to the music, the lyrics are also heavier than the rest of the Priest discography. They are dystopian, apocalyptic, even horrifying, and even come to touch on "uncomfortable" but always fascinating themes such as religion and sin (Between the hammer and the anvil and A touch of evil).

The result is pure metal ready to overwhelm the inexperienced listener (but also the expert one). Despite how many artists it has influenced, it is a unique album of its kind, which has also remained unsurpassed by its predecessors and successors. And this is why it is legendary and will always be.

Best tracks: Painkiller, Metal meltdown, Between The Hammer and The Anvil ... See More

I can only look at it now. And now even now, it remains an absolute beast of melodic Speed Metal with more than a few of the genre’s most memorable riffs ever put to record. Halford’s iconic voice becomes a shredding cry here on a much different level than he had ever done before. The drumming flows into Power Metal territory with its constant double bass pummeling, and the guitars weave intense melodies that flirt with Thrash but lean more towards epic stylings rather than dark. And yet, the music and vocals are very aggressive, but almost upliftingly so. Perhaps triumphantly is a better word, as this album is a remarkable triumph of metal and indisputably Judas Priest’s finest hour.

fabrulana   85/100
Oct 15, 2022
Good album but does not find the classic equilibrium of their previous ones

Abdullah   45/100
Mar 18, 2022
Painkiller's album is one of the most overrated albums in history and in metal it is the most overrated and popular album. The album has nothing in it and is annoying This is the third attempt I have given him, but every time I hear it is worse than the previous one

LightningRider   100/100
Jun 13, 2021
Is it the best metal album ever? Close in my opinion, but no. However, if you want one of the best examples of what raw metal power is, check out Painkiller.