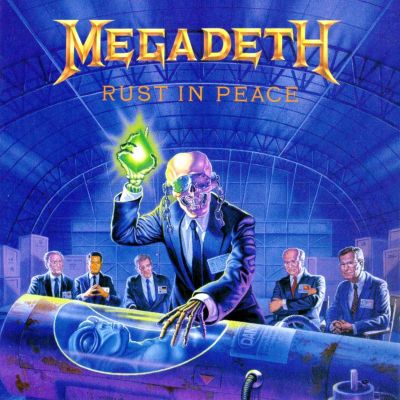 Megametal
My Top 100 Metal Albums of All Time

BlackShadow
The 20 Best Thrash Albums of All Time (Louder)

NWOBHMfreak   95/100
Date :  Aug 17, 2021
Absolutely perfect thrash metal if you are into the more adventurous stuff bordering on technical/prog but not too nerdy. This is the perfect Megadeth lineup who also recorded Symphony of Destruction and Euthanasia. Rust is not radio friendly like those albums, but not as raw as the stuff from the 80s. To me, this is the perfect balance - technical - precise, but still adventurous and heavy. Sometimes I like badly produced, raw stuff like Venom, but this better produced sound hits just right for Megadeth. Mustaine's vocals are "good singing" in any classical sense, but they fit this music just right.

Avoid the remastered version at all costs. Get your hands on an original copy from 1990 on CD for the best sound quality.

Megadeth has long avoided my praise due half to Dave’s poor vocals and lyricism and half to the total absence of real feeling in the otherwise impressive playing. Here, the band improve their already strong technique to enter Tech Thrash territory at times, but much more importantly they add a heavy dose of intelligent and evocative melodies that serve the song instead of simply showcase talent. The first few tracks have earworm riffs for days, just galloping one after another, only stopping for equally fantastic solos.

Dave’s vocals aren’t good here, however, he has found the sweet spot in making them work with the music, and most of the time they work really well. Holy Wars is the best example, as he switches between angry snarling about government, to a rough, desperate croon that actually sounds pained when playing the role of The Punisher lamenting what he’s been through. His voice doesn’t always hit right, but here it works much better and more often than anything they’d done prior. The lyrics range from very good to not so great, but they almost always manage to be better than the shallow words of their 80’s output.

There’s so much energy and good technique that even the weaker songs on the album are quite good. However, it is certainly a glaring weakness that side A is so, so much better than side B. Once you get halfway through, you’ve very little to look forward to in comparison of the awe-inspiring material that starts you off. In terms of high points though, this album reaches heights that are absolutely deserving of its praise. ... See More