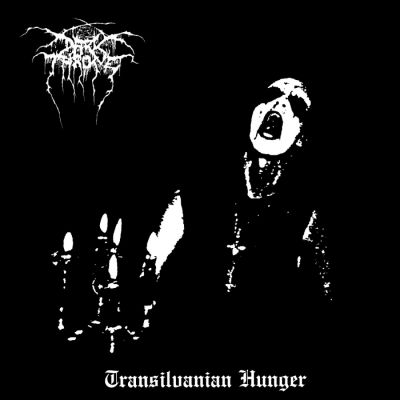 Fenriz handled all instruments on this album, as confirmed in at least two interviews.

The person on the cover is Fenriz.

Some pressings have the phrase 'Norsk Arisk Black Metal' (Norwegian Aryan Black Metal), but due to the negative response of many distributors around the world, that phrase was replaced by "True Norwegian Black Metal" in later pressings.

Reissued and remastered in 2003 as a digipak featuring a video interview clip.

English translations:
2. Over Mountains and Through Thorns
3. Poet of Satan's Sun
4. Castle in the Distance
5. Tombs in the Misty Halls
6. In a Hall With Meat and Mead
8. An Ás* in the Deep Woods

TheBerzerker   90/100
Date :  Feb 21, 2010
Darkthrone forms one of the three pillars of what I consider, and actually what most people consider, to be a 'true Norwegian black metal', along with Emperor and Mayhem. Like others have mentioned in their comments and reviews, their influence over latter generation of black metal stands impervious and still; though I believe it is mainly due to their second studio album "A Blaze in the Northern Sky". While Darkthrone established, let's say, a foundation for the black metal to thrive with their 2nd album, it seems like they are now showing some musical prowess to all musicians with "Transilvanian Hunger": despite their minimal structure; little variation in song structure with only 3~4 riffs per songs, it sounds like a qualitatively chock-fulled album like "Slumber of Sullen Eyes".

However, the true outstanding quality of this album lies on their clever song placement; "Transilvanian Hunger" is meaningless unless you go through the whole album at once, as if the songs were unavoidably separated from a one completed version. The individual songs are not as appealing as a whole, which somehow pleasantly forces the listeners to go over and over again with the album. Darkthrone is not the band which produces elusively sophisticated music with all the subtle implications of themes and motifs; Darkthrone IS the band which produces straight-forward, evilsonic and cold, instinctive music that they even had to name their album "Transilvanian Hunger", something we naturally crave; unlike the sexual instinct (one could probably find little argument with the notion that sex is very different from thirst or hunger as a motivational drive), which not only fulfills our biological needs but some crucial social ones as well, the "HUNGER" in the name indicates that this is not that damn complicated to understand, but the album is designed to satisfy some of the basic needs of the listeners, a crave for the better music, in a very minimal yet a beautiful way. ... See More

SilentScream213   80/100
Jun 3, 2022
Straightforward and consistent, a great collection of some of the purest, trvest Black Metal you'll find.

xxnoodlesxx0   90/100
May 14, 2022
A stone cold black metal classic, and for a good reason. The bad production in this album creates a cold atmosphere, just like you're walking in Norwegian forests. The riffs are hypnotic as well, and the drums sound like they are played from afar, not to mention Nocturno Culto's vocals are great as always. In short, this album is genre-defining, you can't go wrong with it.