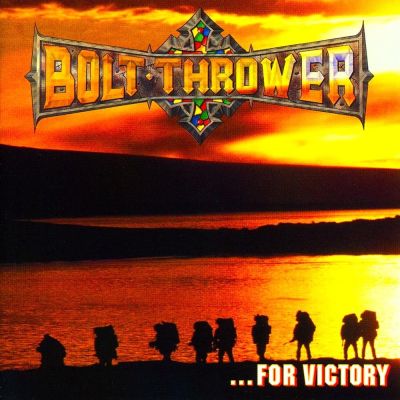 The cover photo shows the marching British infantrymen during the Falkland conflict between Great Britain and Argentina in 1982. ... See More

SilentScream213   90/100
Date :  Jun 3, 2022
Once you get to Bolt Thrower’s 5th album “…For Victory”, there’s not much left to say. Bolt Thrower are one of those bands guilty of writing the same song and putting out the same album over and over. And the song happens to be really good.

The album is scarily consistent, throwing out one riff monster after the next. Each song has a decent variety of speedier aggressive parts and crushing slower/midtempo sections. As always, there’s a very martial atmosphere here, and the dense, rhythmic song structures feel like an enemy invasion. The vocals are fantastic as always, a deep roar that is quite intelligible, like a demonic commander calling out orders. The lyrics here are a bit more realistic than before, and evocative of the more serious catastrophes of war.

If you’ve heard one Bolt Thrower album, you’ve just about heard ‘em all. But when they’re this good, who’s complaining? I’ve got 9 more cuts of Death Metal greatness to add to my forever playlist.

ErebosAkuma   100/100
Apr 9, 2021
To me this is the greatest Bolt Thrower album of all time. The tone of the whole thing is so doomy it's just amazing. And those vocals are sounding better than they ever have. Truely a masterpiece and highly recommended!