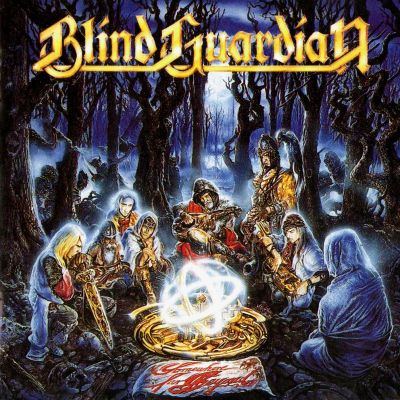 Recorded and mixed at Karo Musik Studios in Brackel / Hamburg, Germany in March / April / May 1992.

SilentScream213   85/100
Date :  Sep 28, 2021
I can’t tell if this is a transitional album yet cause I haven’t heard anything they released after, but on Somewhere Far Beyond, Blind Guardian really start to lean into more modern sounding cheesy melodic Power Metal. They’ve still got their thrashy Speed Metal edge, but a much larger focus is put on keyboards/synths and the general epic atmosphere. There’s also quite a variety of styles present, even in individual songs.

Most of the tracks here are magnificent; catchy yet fierce, energetic yet anthemic. I really like the vocals too, having a rough edge of aggression most of the time, but easily hitting smooth melodic notes when he needs to. Guitars, bass, drums, keys; all splendid, adding great flavor to the mix.

My huge complaint with this album is the amount of useless filler. Out of the ten tracks, two are pointless interludes that add nothing to the album, and the first Bard Song is an acoustic song that just isn’t up to par. Acoustic ballads can be beautiful, but this one is missing that special something and just ends up breaking the flow of the album. The bonus tracks, which are actually usually included in main releases, are great tracks that definitely add to the album in my opinion.

Unfortunately not as consistent as previous releases, but many of the tracks here are absolute top-notch Power Metal.

Bobcat94   95/100
Aug 24, 2021
Through a raw and powerful effort, this is the group's first breakout record, setting the bar for them going forward. Personal Tracks: Time What is Time, Journey Through the Dark, Theatre of Pain, The Quest for Tanelorn, Ashes to Ashes, The Bard's Song - In the Forest, The Bard's Song - The Hobbit, and Somewhere Far Beyond