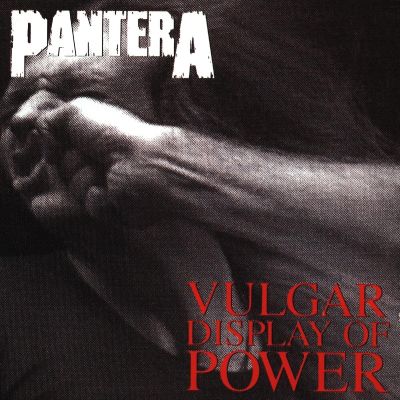 The title of this album comes from the movie "The Exorcist". The priest asks Raegen to prove she is the Devil, to which she responds "that would be too much of a vulgar display of power".

For the cover, a fan had allowed the band members to punch him in the face. They had to do it over 80 times until they got the right picture.

Reissued by Atco Records on August 11th 2008 with Far Beyond Driven on 2 CD's.

SilentScream213   80/100
Date :  Sep 28, 2021
The legendary Vulgar Display of Power. The TRUE original tough guy metal album, and the bottom line set for all of Groove Metal. Does it live up to the hype? Well, yes and no.

Vulgar Display of Power is actually one of the first metal albums I’d heard, thanks directly to three of its songs inspiring music in Doom. Back then, Phil’s harsh vocals bulging with testosterone were too tough for middle school me. I couldn’t handle the masculine aggression in that creature, but the riffs were awesome enough to get me to stay until my ears were able to withstand the full-on assault of his drug infused gorilla arms. The music was practically seeping with bull semen and stale alcohol, the guitar tone a disgusting buzzsaw drawl, and the drums hitting like concrete. The cover represents the music well.

The album jumps between aggressive Thrash beats and sharp riffs to plodding, sludgy groove sections; this pretty much set the standard for Groove Metal to follow as Thrash’s slower brother. For me, the Thrash bits are the best part. Songs like “Rise” are perfect example of unrelenting aggression. The pure Groove tracks like “Walk” do very little for me, and it’s that aspect of the album that makes it weaker than Cowboys from Hell to me. However, slower numbers “This Love” and the devastating “Hollow” are super unique and very well-done examples of Pantera’s slower side.

So why do I say “yes and no” as to whether this album lives up to the hype? Well, because across the span of many websites and circles, Vulgar Display of Power is actually not rated insanely high, usually sitting around the “great album, but no masterpiece” numbers. And that’s exactly what it is, simply an unprecedented, flawed, off-center punch in the face like no other. It is unabashedly itself; no masterpiece, but a very vulgar display of power that you can’t look away from, and will certainly never forget. ... See More