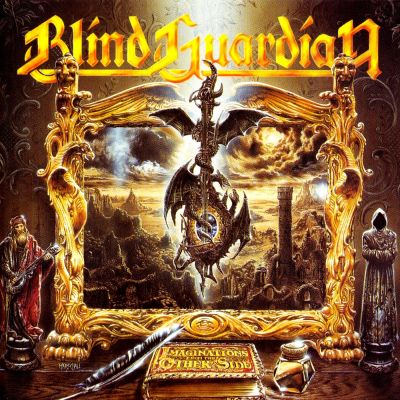 Imaginations from the Other Side Lyrics (9)

Imaginations from the Other Side

Imaginations from the Other Side Information

The lyrics are mostly based on Arthurian legends and general Camelot folklore, a subject Hansi Kürsch had been reading extensively about just prior to the writing sessions for the album.

Imaginations from the Other Side Videos

Imaginations from the Other Side Videos (8)

Imaginations from the Other Side Lists

SamSinGi
The Best Metal Albums of Each Year Since 1980

Imaginations from the Other Side Reviews

SilentScream213   90/100
Date :  Oct 13, 2022
On their 5th album, Blind Guardian released what I consider to be their best work up to that point. I’m one of the few who preferred their aggressive Thrash/Speed days on their first two albums to the more polished and melodic albums that followed (though this is mostly because they always had useless interludes bloating them). Well, Imaginations still has one of those in the way of acoustic ballad “A Past and Future Secret,” but the rest of the material is just about as perfect as Power Metal gets.

Blind Guardian stated themselves that the new producer for this album took them to new levels, and it shows here. The choruses are insane, the vocal performance in general just sends shivers down your spine in a perfect mix of gruff yell-singing and epic, multilayered cleans. The guitar melodies sound a bit darker than before, which is always welcome, but of course they remain just as catchy. The rhythm section is just superb, so much speed and aggression on display here, definitely matching their Thrash days in that department.

The album isn’t a true concept album, but themes of lost innocence run rampant throughout the album. Letting go of better imaginary worlds, living under a suppressive political system, and learning to cope with inner demons and even childhood trauma are all alluded to in ways that still sound fantastical. I absolutely have to mention the track “Bright Eyes” as the best thing they have done yet, and by god it will be hard for them to surpass it. The chorus in the song is one of the most immense I’ve ever heard, and the riffs are passionate and dark. It’s quite a moody song for the band, and supposedly about a child struggling with abuse from his parents. It’s as powerful thematically as it is musically, an instant standout from the moment I heard it and only growing stronger the more I listened to it. ... See More

Best Tracks - Imaginations from the Other Side, I'm Alive, The Script for My Requiem ... See More

Killing Track  :  And The Story Ends
Best Track  :  Imaginations From The Other Side , I'm Alive , The Script For My Requiem , Bright Eyes

Imaginations from the Other Side Comments

LuckyStar   95/100
Nov 25, 2022
Imaginations from the Other Side was Blind Guardian's biggest departure at the time from their original Speed Metal roots. The songwriting on the album is absolutely superb, despite going in different direction, than we were used to. The synths and big choruses were gaining prominence, as was an increasing shift towards Power Metal.

Bobcat94   95/100
Aug 17, 2021
Revolving around Arthurian folklore, this album has certainly stood the test of time, and I can see why it is a clear fan favorite from start to finish. Personal Tracks: Imaginations from the Other Side, I'm Alive, A Past and Future Secret, The Script for My Requiem, Bright Eyes, And the Story Ends [Honorable Mention: Another Holy War]

LightningRider   100/100
Jun 13, 2021
An incredible exercize in hardcore energy and progressive structures. The only flaw is that too many songs share the same power metal tempo that Emerald Sword and Through the Fire and the Flames are known for.

progmetal   90/100
Dec 27, 2020
Such a great album and another masterpiece from this band. Many consider it as their best one but I'm not one of those, and what is more, I reckon SFB, NiME and ANATO are better than this.