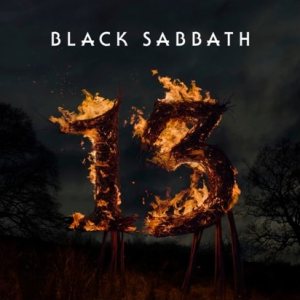 A video was made for "God Is Dead?". The video was directed by Peter Joseph, an independent American filmmaker mostly known for his conspirationist -themed Zeitgest movie series.

Another video was made for "Loner", consisting of live and fan footage.

The cover artwork was unveiled on April 4th 2013, created by the London-based studio, Zip Design. The cover depicts an 8-foot tall wicker "13" woven by British sculptor, Spencer Jenkins. The sculpture was set ablaze in the Buckinghamshire countryside and shot by photographer Jonathan Knowles, with the resulting inferno visible for miles. The construction of the woven numbers was featured in a behind-the-scenes video released by Zip Design, which was also shot by Knowles' team.

The recording date of "Dirty Women" was discovered by listening and comparing available bootlegs from Black Sabbath's 2013 Australian shows.

Black Sabbath performed the song "End of the Beginning" on the season finale of the TV series CSI: Crime Scene Investigation that aired on May 15th, prior to the album release. The footage of the performance was released as a live video on June 11th. ... See More

rockerman   100/100
Date :  Mar 21, 2021
My most played album #63. Black Sabbath - 13! Released in 2013, Black Sabbath’s first #1 on the American billboard chart also peaked at #1 in 9 countries. Sold a million worldwide, amazing when so few Cd’s were sold in 2013! Yea Ozzy and Tony back together! The 19th studio album so they called it 13 LOL! The best Black Sabbath album, sense Heaven and hell? I think so! Very true to the old form, if you love Sabbath you should love this. This album got as many plays in 7 years as other albums got over a 22 year span, 32 plays my most played Sabbath! So is god dead? At least listen to the first single then play the whole album! Currently at #1,638? Black Sabbath fans must be sleeping! Or are they dead? Great songs; "End of the Beginning", "God Is Dead?", "Loner", "Zeitgeist", "Age of Reason", "Live Forever", "Damaged Soul" and "Dear Father".