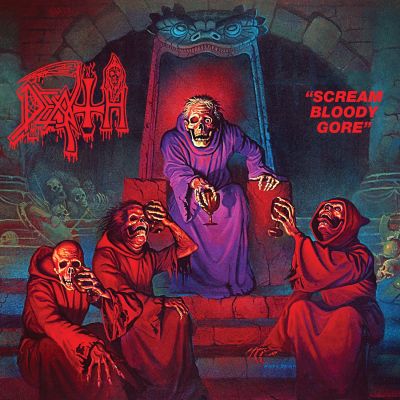 Recorded at "The Music Grinder" in Los Angeles.

Even though John Hand appears on the booklet, he only joined the band after the album was recorded.

SilentScream213   90/100
Date :  Jun 16, 2020
Scream Bloody Gore is most likely (depending on who you ask and how strict you’re being) the first true Death Metal record, and by that I mean it’s not Death and Thrash like Seven Churches or Blackened Death Thrash like Morbid Visions. Absolutely there are still Thrash influences, but this is primarily a Death Metal record and could not be argued otherwise.

Amazingly for a debut album in a genre still in infancy, the music is grade A material. The musicianship is tight and fast, Chuck being rather technical even here. Chuck’s growls are also prime cuts of the genre, inhibiting a fantastic middle ground between demonic growls and discernible yells. Even the production is pretty good for an underground debut, nothing groundbreaking but all the instruments including the bass are audible and strong. And that snare sound – my god, never heard anything that stuck with me so much. Just the right amount of reverb to pack a lasting punch that somehow sounds sinister. This is the kind of drumming that is simple (not easy!), but serves the music so incredibly well.

There is one weakness here. For many a non-issue, but for me a glaring one: the lyrics range from bad to offensively atrocious. They’re pretty much what it says on the title, with subjects of gore, random acts of violence, death, etc. Don’t get me wrong, there is a right way to do this – Pig Destroyer and Slayer (when Tom is writing) are prime examples of writing eloquently and effectively on such matters. The lyrics here sound like an 18-year old’s Deathcore band. They’re just so juvenile they take away from the music at parts, and ruin the otherwise evil atmosphere. ... See More

UnholyAndre   85/100
Nov 23, 2015
Good stuff! Death have had some really interesting material for their first release!

Kildneybean   95/100
Jun 4, 2015
Real Fking Old School Death Metal!!! People who haven't picked this one up yet: do yourselves a favor and listen to this lil' beast. Not to be missed.