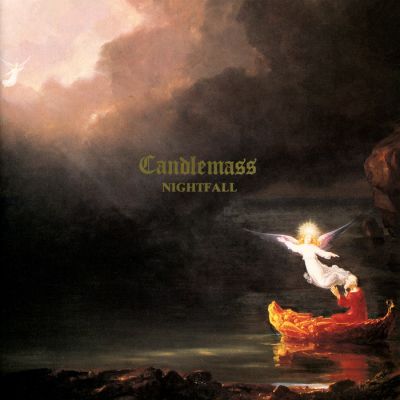 Music and lyrics by Leif Edling except "Black Candles" written by Mike Wead and "Marche Funebre" written by Fryderyk Chopin in 1837.

Recorded at Thunderload Studios between July-September, 1987.
Mixed at Stockholm Recording Studios in September 1987.
Produced by Candlemass.

A video was made for ''Bewitched'', directed by Jonas Åkerlund. Per "Dead" Ohlin of Mayhem appears in this video.

The cover art is a portion of The Journey of Life - Old Age (1842) by the American painter Thomas Cole.

"Bewitched" is lyrically a re-imagining of the Pied Piper of Hamelin. ... See More

SilentScream213   80/100
Date :  Jun 16, 2020
Candlemass enter one of their most celebrated lineups here with the addition of Messiah and record the great Nightfall. By 1987, Candlemass was pretty much indisputably the best Doom band around, especially solidifying the fact after dropping a follow up album just as amazing as their debut (both of which remain their finest works in most people’s opinion).

They continue the same style as their debut, adding an epic and even uplifting sound to the slow and simple Doom genre, rife with religious symbolism as well as occult fantasy. Messiah and leif grab all the attention here, as Leif wrote most if not all of the music, including many of Trad Doom’s most memorable riffs, and Messiah puts on a vocal performance that would sound at home in an opera show. The act works well for the epic Doom rockers, and many of the songs tell small tales that effectively play off this aesthetic.

Unfortunately, while the debut was strictly 6 great songs, this album has a bit of filler found in mostly pointless interludes between songs. At the Gallows’ End and Samarithan are two of the greatest songs the band ever wrote, but the filler puts this album just below the debut in my opinion.

Kildneybean   95/100
Jul 24, 2015
An another timeless classic, released in a streak. Make sure to check out the music video of Bewitched featuring Dead.