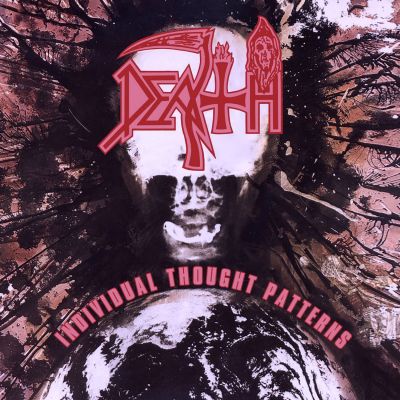 Recorded and mixed at Morrisound Studios.

suKIzo
The Best Metal Albums of Each Year Since 1980

SilentScream213   95/100
Date :  Feb 8, 2022
It’s truly astounding how consistent Death are at crafting top quality Death Metal, not only album to album, but song to song. Every Death release so far has been a fantastic showcase of new ideas and progression on top of all the classic traits that make it unmistakably Death. Individual Thought Patterns did not fail to exceed my expectations despite the legendary precursor Human.

This album has got to by Death’s most melodic, technical and progressive so far. The riffs are incredibly melodic and memorable, with multiple guitar melodies often playing wonderfully off each other. This of course does not take away from the brutality of the album; it borders on melodeath at times, but at the core is still classic OSDM. The album doesn’t sound incredibly evil compared to other Death Metal, but this is fitting with Chuck’s desire to focus on more philosophical subjects. As the album title suggests, this record is total brainfood, fortunately the kind where the riffs get stuck in your head.

What really blew me away on this one was the rhythm section. The drumming here in on another level, and so many patterns here were totally fresh. As I suspected, this is where Gene Hoglan made his debut in Death. His creativity with the kit is monstrous, and goes far beyond progressive or technical. He manages to craft entirely original beats in every song, and knows exactly when to go all out and when to serve the music with something slower or simpler. The basswork of Steve DiGiorgio is similarly praiseworthy, and thank god the production made it clear and audible. I was fairly certain it was fretless bass based upon the sound, and it seems he is possibly the first to bring fretless bass to extreme metal.

5 albums in, and Death is still at the forefront of the genre they helped create, leading it in new directions and maintaining their status as the best of the best. ... See More

LuckyStar   80/100
Nov 20, 2022
Individual Thought Patterns is one of Death's mid-releases and is another album with new line-up. Yes, Steve DiGiorgio was still left in the bass but Paul Masvidal was replaced by Andy LaRocque (King Diamond, Illwill) and Sean Reinert was replaced by Gene Hoglan (Dark Angel, Testament, etc.). This album clearly sounds like a band that just wanted to explore the progressive world and move away from the death metal world.

Cosmicism   95/100
Oct 6, 2022
You don't need to like death metal; Death is heavily recommended either way, and this is a great album to prove that.

Kildneybean   100/100
Jun 5, 2015
Along with its predecessor, Individual Thought Patterns is essentially a stream of never-ending musical superiority. Highly recommended.