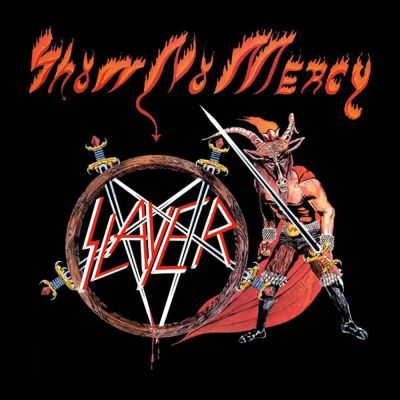 Recorded & mixed in November 1983 at Track Record Studios and released a month later.
The album took only eight hours to record (from 11 pm to 7 am), so as to cut down studio costs, which explains the poor production quality.
Mastered at MCA Whitney Recording Studios & The Town House Studios.

Certain re-releases of this album include the Haunting the Chapel EP, as well as the song "Aggressive Perfector", which was on Metal Massacre 3.

One Roadrunner version (released in 1985) has "Aggressive Perfector" as bonus track, between "Metal Storm" and "Black Magic".

A specially remixed version of "Die by the Sword" exists on the 1984 Total Destruction compilation on Metal Blade Records. ... See More

SilentScream213   100/100
Date :  Jul 7, 2019
I’ve always loved Slayer, this album being among my favorite releases by them, but it becomes so much more amazing when compared to the contemporaries at the time. Absolutely nothing was this insane – not even close.
Speed? We had Metallica, but they’d only go into overdrive on a couple songs – and even then, it never matched Slayer. Tremolo guitar picking has never been this fast. And Dave’s drumming was something else. The speed and technique of the drumming here had never been seen in metal before. I’d guess only some Jazz and the best Prog Rock drummers had the level of chops Dave put on this album back in 1983.
Riffs? Hell no. You think Paranoid had great riffs? Number of the Beast? They were all lacking something. Slayer doesn’t just deliver riffs – they deliver evil riffs. Wailing, screaming guitars walked the line between melodic and chaotic, bringing a perfect harmony of very catchy riffs and a dark, harrowing mood. No music sounded this dark and melodic at this time; any other bands attempting the evil schtick at the time relied on purely being noisy and chaotic with little technique (Venom, Hellhammer).
And then there’s the vocals. Not just the style, but the delivery. Tom’s trademark yelling here has become something often imitated, and I daresay it was many people’s introduction to harsher vocal styles. Tom was not the first to employ a harsh vocal style (Venom, Black Flag), but he absolutely did it better than anyone else at the time. He brought just the right amount of melody to the table; he can hit notes, and his words are very intelligible. Despite that – or perhaps, because of it – his bark comes off as much more convincing. As opposed to the flat screaming or growling of bands like Hellhammer and Venom, you could discern emotion in Tom’s voice, and that emotion was anger, hatred, a general misanthropy and dedication to the dark arts. That delivery carries over to the lyrics – again, Slayer were not the first to write Satanic lyrics. Venom mostly started that, but they didn’t take it too seriously. Slayer, along with King Diamond, were really the first band to convince you that those lyrics about Satan, murder, and black magic were genuine. Of course they weren’t, but damn was Tom’s fierce, rabid bark convincing.
Back in 1983, there were absolutely no albums that matched this. Any other album that had traits of what makes this great was missing something else, whether it be the speed, aggression, technique, or mood. Slayer was the first band to unite these qualities in a way that would spawn a staple style of dark metal carried on by thousands of bands.
Even after listening to hundreds of albums that were released pre-1983, Show No Mercy remains chronologically my earliest 5-star release, and nothing up until that point in music has come even close to instilling in me the sense of awe as Slayer did with their debut. ... See More