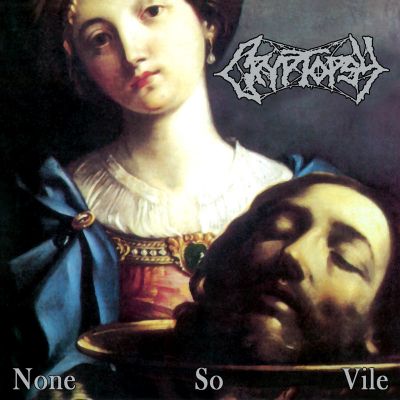 None So Vile Information

Has been re-released on Displeased Records and Century Media Records.
Some re-release versions feature gold colored font for the logo / title, rather than silver as on the original.

Re-released on CD in 2012 by Hammerheart Records. These releases have the title misprinted on the spine as "None To Vile".

None So Vile Videos

None So Vile Lists

None So Vile Reviews

Now, I just wanted to elaborate this comment and add descriptions to the sheer awesomeness of this wonderful album. Now, After releasing their first album, Blasphemy Made Flesh, these Brutal Death Metal guys from Montreal, Canada cranked up the brutality, speed, intensity and insanity, making their sophomore release, None So Vile THE BEST Brutal Death release of all time. Now, I've heard a lot of Brutal Death records and from time to time they creep up the list of (what I think are) the greatest releases. Then I change my mind after listening to this album again. Mainly because this album has all the creativity and freshness an album can have.

Now on to the actual album review. The album clocks in at 32 minutes, which some may consider a short time. The first song, Crown of Horns(obviously a play-on-words) opens up with Flo's fast, intense drumming and Lord Worm's deathly scream. When I first heard this song, only by listening for 10 seconds I thought that the sheer shove-it-in-your-face brutality was utterly amazing and nothing alike what I had listened to. The song then quickly goes into the first verse: a nicely paced riff, the same crushing drums, with Lord Worm incomprehensibly barking like some sort of schizophrenic maniac. The song quickly turns into another phase, exhibiting different drum lines with ever changing riffages. The riffs these guys incessantly throw at the listeners are amazing; they are really, really creative with lots of unexpected progressions. Not only that, but the wide range of riffs they showcase is extreme. You'll probably hear more than 10 guitar riffs per song, all really distinctive and different with no regurgitations. Now, some of you may be familiar to your standard Brutal Death song flow, so you may think mid-song that the song structure is somewhat bland. Cryptopsy breaks that thought instantly by actively incorporating breakdowns. That's right, the ones you hear in (suffix)core subgenres. The usage of breakdowns is what spices up the songs more. In Crown of Horns specifically, around the 1:50 mark the song breaks down into a slower time signature, producing more of a heavy feeling compared to other parts of the song. You can't help but headbang to the breakdown parts as the songs proceed in a headbanging-friendly manner. I think that would be a killer live show experience. (My Favorite breakdown is from Benedictine Convulsions around 3:25. The deathgrowl by Lord Worm makes it so much better.) After this part, the song proceeds to a reprise and ends with stuff that were played before, mostly with a slight difference.

Let's talk more about creativity regarding progression of songs. The song Phobophile opens with a piano part, breaking the expected-of song opening that uses heavy drums and gritty vocals. Then the bassline comes up, building up the whole song to drop it down on top of the hill. The song proceeds using the bassline as the main riff. Then the song actually goes through a rollercoaster of tempos. It rises and falls, then halts at just the right moment, to progress to another major breakdown. Then the song climbs up another mound and then dramatically falls down. What I'm trying to shed light on is that they destroyed the standard(no brainer) groovy and slamming song structure, adding a lot more to the songs.

All in all, this album is really the embodiment, the epitome of what a perfect Brutal Death Metal work should be like. This is my number one BDM release of all time and probably will be till the end of time. ... See More

None So Vile Comments

Grantholomeu   90/100
Nov 7, 2021
This is an album you listen to when you want to feel like you could rip someone's head off. Insane technical skill, paralleled with extreme brutality!

ErebosAkuma   90/100
Apr 18, 2021
This album is the standard for brutal death metal and is borderline perfect. If you enjoy ungodly fast everything and weird metal vocals you will love this!