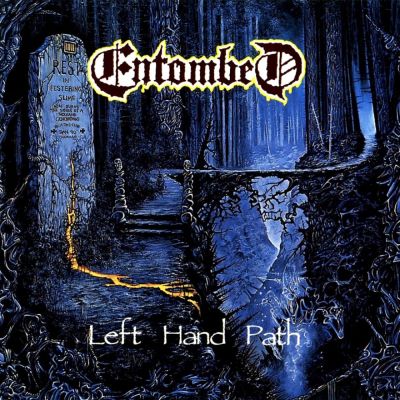 Some of the tracks featured on this album were written while the band went under the name of Nihilist.

The title track incorporates the theme of the 1979 horror film Phantasm.

A music video was made for the song "Left Hand Path".

Reissued by Rock Brigade Records in 1991 on vinyl with the original album bonus tracks.

SilentScream213   95/100
Date :  Feb 12, 2021
Good god. Death Metal was born in the late 80’s, but most of that stuff isn’t a huge leap away from extreme Thrash and Black metal of the same decade. Even the albums that had broken from carrying clear Thrash influence still sound like a genre in development. This beast sounds like it could have been released yesterday.

Entombed took one step back and two forward. They slowed down a bit, and instead of trying to outdo their peers with technical prowess or blistering intensity, dug themselves a grave and adopted a truly sepulchral sound. Insanely downtuned guitars with a sludgy buzz sound like they’re cutting through a murky swamp, while the rhythm section lays tight and varying beats that pound at a steady mid-tempo (by extreme metal standards). The vocals are the deepest growls laid to record by 1990, and there is a very cold, grave atmosphere that runs somewhat contrary to the genre’s roots in hellfire. The blue cover could play into this as much as the band’s icy homeland – but this is unmistakably the closest to true, cold death that Death Metal had ever gotten at the time