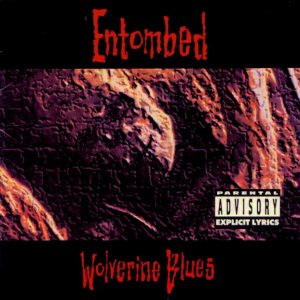 Music videos were made for "Wolverine Blues" and "Hollowman".

The album which moved away from their Death Metal roots to the 'Death & Roll' styled music they produced from this album onward. Also Featuring L G Petrov back on vocals.

There are three different audio versions of the album. The first one had samples in the songs "Eyemaster," "Rotten Soil," and "Out of Hand." The second (with the comic book promotion) and third versions deleted the samples, and the second also edited the song "Hollowman".

Also released with Marvel's Wolverine on cover. What's funny about this is that Entombed never wanted their album to be related to the Marvel Comics superhero; Earache Records, without their permission, made a deal with Marvel and used Wolverine to promote the album to the mainstream audience. This can explain how Entombed became a household name to rock fans.

Released in Japan in 1993 by Toy's Factory with a bonus track not mentioned on the CD artwork:
11. State of Emergency (Stiff Little Fingers Cover) [02:35].
This version includes samples taken out by Earache Records in later pressings.

Kildneybean   95/100
Jun 12, 2015
Death n' Roll is kinda my cup of tea. That being said, I'd like to note that this album has everything that the subgenre has to offer. It's just plain amazing.