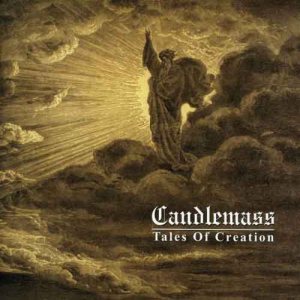 "Under the Oak" is a re-recording of a song that originally appeared on "Epicus Doomicus Metallicus" (and also the "Tales of Creation" demo -see bonus reissue disc).

Leif Edling originally wanted another Thomas Cole painting for the cover, but his bandmates "talked him out of it". A modified Gustave Doré work called 'The Creation of Light' was used instead.

Candlelight Records reissued this version of the album in 2005, without the slipcase. ... See More

SilentScream213   80/100
Date :  Nov 1, 2020
Tales of Creation is the last of Candlemass’ original golden era of albums, and what a fine way to conclude Messiah’s (first) run with the band. The album is a concept album of sorts, focusing on creation, loneliness, introspection and self-love. It may not have a direct overarching story, but there are call-back moments throughout that connect the dots.

Musically, it sounds rather identical to the previous two albums. Every song is strong, aside from the short segues there are no weak moments. Messiah’s voice is in top form, and Leif’s slow, melodic yet sludgy riffs are on point. You can’t expect anything new here, but you can expect another top notch Candlemass album.

Kildneybean   90/100
Sep 2, 2015
I don't know about y'all, but man I sure love myself some good ol' Doom Metal music. Now Candlemass' fourth album, Tales of Creation, did just the trick cause it fit in both the categories. Old, yeah sure, but good also. Just give a listen to the stunning riffs they procure your ears.