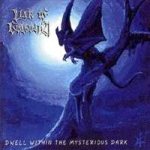 Album rating :  75 / 100
Votes :  1
3. Towards The Timecentre (7:15)
A secret life, independant and forgotten, hiding in the outskirts of a humanoid society, covered by the leaves of the human mind's autumnal remnants. She lived colliding with the relativity of our time.
She had seen the lives of the violated begin with their deaths, and She observed them all, while they travelled on towards the wombs of those to be scorned, on towards their ends. It had lived for all eternity and had seen it all, reversed: extinction of mankind for Her was nothing more than the
beginning of our lives, reflected in Her thousand eye: the struggles of the puppet race on the ball of dust, floating counterclockwise around a ball of light light, they tearfully named Sun. She remembered how She laughed at them, While She travelled forth, towards the beginning of their time.

In the aeons that had passed She had seen the universe implode, and start its travel back towards this nothingness it awaited. Balls of dust and light travelled on towards the empty centre. Awaiting to be transformed into waves of unknown energy. When She was younger, still an Ancient Queen,
She leapt from star to star to discover the eternal secrets. But Her exploration went no further than this earth, where She rested and observed the manipulative breed. And although She was reserved in time and thus invisible to them, they began to feel Her presence and started
worshipping the "thing". She remembered how She laughed at them, when She discovered their small capacity to understand any truth.

How entertaining they had been, fighting, laughing, crying. But their race was soon extinct evolving into primitivity. And at this point it was only a matter of Her time, to see this system fall into the claws of maelstrom of the great implosion. And soon it will disappear, and She knew with all Her divine brains that it was also Her time to die and disappear.
And everywhere time has ceased existance