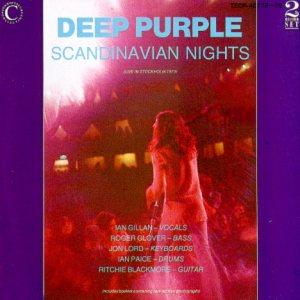 It was originally recorded by Swedish National Radio for a radio show called Tonkraft at the Stockholm Konserthuset on 12th November 1970, but not released until 1988.

The US CD was titled "Live and Rare", while the European double vinyl and CD were both titled "Scandinavian Nights". The European vinyl release contained a limited edition picture booklet.

The track timings printed (on both European vinyl and CD) refer to the length of the actual songs, in-between pauses are not included, but the timings on the US CDs do include the pauses. To fit the vinyl version the original running order was changed from the original concert: this was carried over to the CD release. ... See More