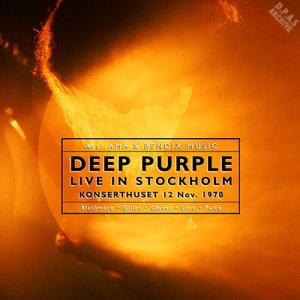 The album was recorded in the capital of Sweden on November 12 1970, at Stockholm Konserthus and recorded by Swedish "Tonkraft" (a radio show).

This concert was originally released in 1988 as Scandinavian Nights in Europe and as Live and Rare in the USA. The original mastertapes were later discovered and are remixed for this release.

Additionally, the Scandinavian Nights 2CD had the same running-order as the vinyl release, the set being adjusted to fit the timing-restrictions of vinyl. For Live in Stockholm the correct order was restored and this, together with the improved sound-quality, makes it the definitive release of this recording.

Songs on the album are from the Deep Purple in Rock album, and long instrumentals from earlier albums. The two songs "Mandrake Root" and "Wring that Neck" took up half the concert in the early days, until the Fireball tour. ... See More