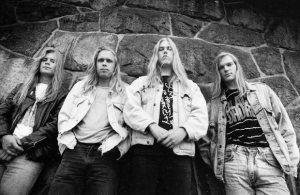 Additional notes
The year when Stone was formed is a bit unclear, but it was probably in 1985. Janne Joutsenniemi and Roope Latvala, who were the two masterminds of Stone, had been playing together with varying line-ups and band names for a few years before that, said to have earlier played under the name Cross of Iron. They became Stone when Pekka Kasari and Jiri Jalkanen (whose father was the famous Finnish country/schlager star Kari Tapio) joined the group. Most of them were around 15-16 years old when they started rehearsing and playing gigs at youth clubs. They originally played a more traditional heavy metal style, but gained more popularity as they went for a more aggressive speed/thrash sound.

They became the crowd favorite of the Metal Massacre underground show, and were noticed by Finnish rock magazine Rumba in 1987 where they received good live reviews. Their demos earned them a record deal with Megamania through which they released their first single in 1987 and their debut album in 1988, where they played a Bay-area style of speed/thrash. With their second release, No Anaesthesia in 1989, their style became more technical/neo-classical thrash, and with that album they became one of the most relevant thrash bands of that time.

Jiri was fired in 1990 for reasons unknown, and was replaced with Markku Niiranen from Airdash. On Colours, their music was considered too complex and so their popularity started to fall, but it probably also had something to do with the rising popularity of death metal. They released Emotional Playground in 1991, and the same year Stone announced that they would disband after a small final tour. According to Janne Joutsenniemi, they felt they had pushed limits of thrash as far as they could, and the title track of Emotional Playground was also suggesting that they wanted to do something different. And so, in September 1991 Stone ceased to exist.

Janne Joutsenniemi formed the rock band Suburban Tribe where he has remained til this day. Roope Latvala kept playing in metal bands; he recorded one instrumental thrash album with his brother Jussi Latvala where they were called Latvala Bros (which resembled Stone's middle-carreer tech thrash), and joined Dementia with Mika Karppinen (who nowadays is the drummer of H.I.M.) for their only album. Later he has played in Waltari and Sinergy. Jiri Jalkanen is playing country/schlager with his father, Kari Tapio.

Stone reunited for a few very successful festival shows in the summer of 2000. Stone gained a revival in popularity in Finland the remastered 2003 re-releases of their albums and through Children of Bodom who were greatly influenced by Stone (and who recorded a cover of No Commands from the debut album). Despite a significant cult fanbase in their home country, Stone never got big abroad.

The band played what was supposed to be a one-off reunion gig on the Sauna Open Air rock festival in June 2008, and later announced a few club gigs on the autumn 2008.