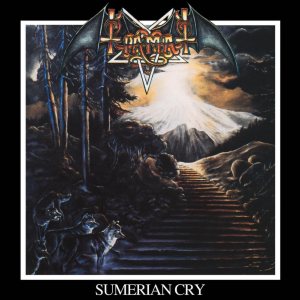 This was the first full-length album ever recorded at the famous Sunlight Studios, Stockholm, Sweden.

Re-released as 2nd press only, together with CMFT Rec by Metalcore Rec. LP and CD (CORE9).

Reissued by Deadline in 1999 and Blackend in 2005 with an alternate cover.
Both versions are barebones layout and contain no lyrics or art.


The 1999 Deadline Reissue besides lacking in art / lyrics has a tracklisting error on the back cover, it lists track 9 as ''Where the Serpents Ever Dwell'', track 10 as ''Outro - Sumerian Cry (Part 2)'' and track 11 as ''The Sign of the Pentagram''.
However the actual CD is correct with the 10 tracks, and in their correct order.

Re-released 2009 on Candlelight / Plastic Head w/ bonus track "The Sign of the Pentagram", and original cover art by Kristian Wahlin, but incorrect lyrics in booklet.