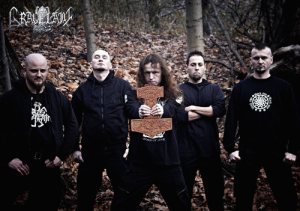 Additional notes
Graveland's style has changed from raw black metal on the early albums to a more epic sound which is inspired by Hammerheart-era Bathory. Lyrically, on the early works Rob Darken was inspired by Celtic beliefs, now he's Wotanism-orientated and calls his music "epic pagan metal".

The band logo was done by Christophe Szpajdel. This logo first time appears on "Carpatian Wolves" and was used up to "Immortal Pride", however it showed an inverted cross instead the thorshammer. This logo was replaced by a lettering in red Fraktur capitals during 1999 and 2003. Since "Dawn of Iron Blades", Graveland uses the shown logo.

There is also a bootleg called We Shall Prevail Again, released by Selbstmord Services, in 2003.

The song "Spear of Wotan" was included on the compilation The Night and Fog Vol. 3 which was released by Totenkopf Propaganda in 2007. A shorter version of "Legion of Giants" appears on "No Colours Records Compilaton II".

German BPjM (Federal Authority for Publications unsafe for the Youth) forbade the sale of 4 GRAVELAND albums in Germany (namely, "Following the Voices of Blood", "Immortal Pride","In the Glare of Burning Churches", "The Celtic Winter").
In may 2008 German Police invaded office of No Colours records and confiskated about 1500 of these old cd's of Graveland. After this act of repression, these Graveland albums are moved to label from USA Forever Plagued Records.
"Blood of Heroes" as well as "Dawn of Iron Blades" are also now banned.
Those albums appear on the website of the label under the name Evarg, with titles shortened to acronyms.
Contributors to this artist