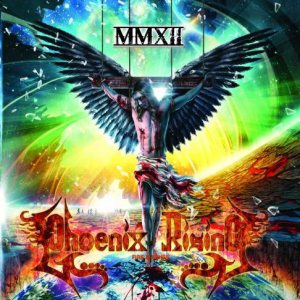 metalmadness8         Rating :  100 / 100
Date :  June 11, 2012
The first time I heard about this young metal band from Spain I thought… “Phoenix Rising/Fire & Ashes, double band name... something new”, but the true innovation here is that the band has recorded two different versions of the album; for the international market the album is delivered in English while the Spanish and Latin-American market has its own version in Spanish language.

The album starts with the intro Tenebris Revelantur which has a dark atmosphere at the beginning with a monk singing, but after a minute the song turns into a piece that would also fit well with the soundtrack of Pirates of the Caribbean. Agoraphobia is the first "real" piece of the album and it is definitely an epic song. The song starts with choral singing while the double bass thunders fat and Miguel González shows that he claims the right to place behind the microphone. A consistently successful track. The Chosen One is a very guitar-heavy piece and Daniel Martinez pulls out all the stops. Last Eternal Night offers us an extraordinary instrumental work again with sweeping melodies and a great chorus. For me, this is the best track of the album along with Agoraphobia.

Fury and Rage is a solid song without imposing largely into the overall work. A violin guides us throughout the track, but the song doesn’t lack strength thanks to the good guitar work. My Love Still Remains is the only ballad of the album and it is completely convincing. Miguel brings a feeling over here really well. Abaddon proves itself as a "typical" power metal track and it is followed by Exodus, a little melancholic midtro. After this, Lost Souls comes back really strong. The groovy guitar riff and the battle between guitar and keyboard at the end of the song is epic. The last song, Nova Era is an exceptionally long song, running more than 11 minutes which is a successful conclusion of a consistently strong album.

If you had never heard about Phoenix Rising, you should give them a chance no matter which genre you like the most. From this young band it is still a lot to expect. Amen!

Black Majesty
In Your Honour Review (2010)

Heralds of the Sword
Chronicles of Tyrinthia: Sword Sworn Review (2013)