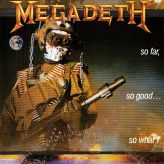 Look deep in the mirror, look deep into its eyes
Your face is replaced, a creature you despise
But I know what you're made of, it ain't much I'm afraid
I know you'll be lying until your dying day

Make up your stories, but truth's so hard to say
Brain is numb and your tongue will surely dig you grave
Your mind is sickly from Alzheimer's disease
And decadence and debauchery killed your memories