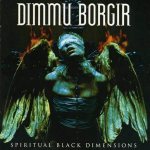 ...And so i will take shelter
In the absence of the light
Hiding like a masked miniature in the dark
A revenant without relief it seems
For the art of becoming a progeny
And to be raised in such curse
Infesting the dead in herdes