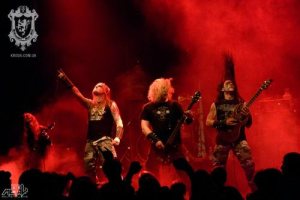 Additional notes
Kroda was originally a studio project, but they started to make live performances with live musicians from the band Ruina since 2007. Their first two gigs were at festivals "Svarogove Kolo" (Krym, 18th August 2007) and "Kolovorot" (Kharkiv, 22nd December 2007).

Despite being associated with the NS scene, Kroda is not an NSBM band.