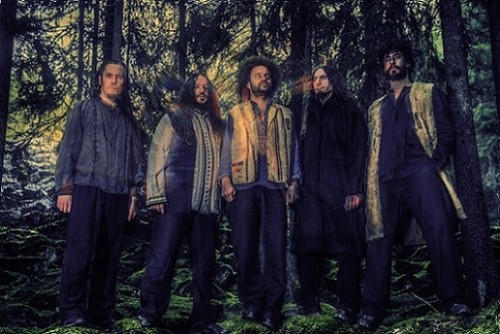 Negură Bunget Photos (2)
Additional notes
Negură Bunget started as a black metal project back in 1995 as a duo, with Hupogrammos on vocals, guitars and keyboards and Negru on drums. After a disagreement between Sol Faur, Hupogrammos and Negru, the band parted ways in 2009 and Negru decided to continue the project with a new line-up, though some allegations have been made suggesting that the band agreed to split up and Negru himself contradicted an agreement with Hupogrammos and Sol Faur, who started a new project called Dordeduh.

Negru reshuffled the band's lineup completely again in 2013 in order to pursue a different musical approach, stating that apart from some permanent members "we'll add another layer of musicians who will join us just for special events and studio projects. This more flexible approach will allow us to increase the use of authentic traditional instruments adding new elements and to explore new musical territories, both live and in studio". After Negru's unexpected death in 2017, all the booked shows have been cancelled and the status of the band remains unknown.

"Negură Bunget" means "Dark Foggy Forest" in Romanian. According to founding member Negru, "[t]he name tries to picture somehow the kind of atmosphere, both musical and spiritual we'd want to create through our music. [...] The two words are also from the Tracic substrate of the Romanian language [...] as the interest for our local history and spirituality is something of crucial importance and meaning for us as a band".