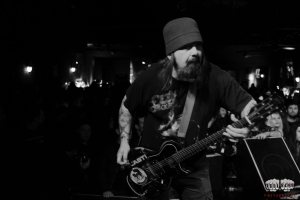 Additional notes
Jimmy Bower is a multi-instrumentalist from New Orleans, Louisiana. He is a well known figure in the New Orleans Sludge metal scene. He is best known as the drummer and founding member of the Southern metal band, Down. He is also the guitarist and founding member of the veteran Sludge metal band, Eyehategod. He was in The Slugs, a precursor to Crowbar in the late 80's. When Crowbar evolved he joined them in the mid 90's on drums and was on a few releases, including the "Broken Glass" and "Odd Fellows Rest" full lengths. He was in Corrosion of Conformity from 2001-2002, he is featured on the "Live Volume" DVD and "Live Volume" live album. He was a founding member of Superjoint Ritual along with Phil Anselmo, he was apart of the project until it ended in 2004.