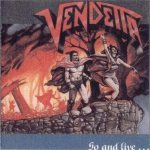 The President has said to 'em:
“The enemy is near !
Kill 'em all, defend your country,
march out without fear !”
Despotism at its best, see the fuckin' slaves
Detonation, chaos, death,
digging their own graves
Die in hell

Good men on the one side
Good are the others, too
Got the order: “kill each other, that's what you must do !”
Disarmament, detente, peace –
promises, not more
Reality are fightin' soldiers dying in this war
Die in hell


Stop these politicians, for they create the war
They're the men, you have to fight against 'em
There's no law
Strike down this madness, soldier take revenge !
Take your destiny in hand, it's you you must defend !
Die in hell