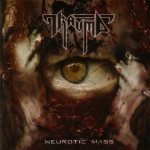 Album rating :  –
Votes :  0
7. Immolated (4:41)
That cold that feeds my blood,
Beholding the dead fortress of conscience,
Hold my hand while I stop breathing the flames,
My suffered corpse will hit the
Ground while you pray for my life.
I can live anywhere,
Once it be outside my flesh,
Yes! I belonged to the nightmareof existence,
Finally I've reached the rotting world of god,
I can't accept a god bigger than death,
Feel the sun getting colder,
Awake the demons
You fed on your cries and laments.
Revelate them in a stream of endless contempt.
Memories will adorn your coffins,
An orgy of mass destruction
And unordered thoughts,
Mindless and violent ritual,
The seed of perseverance that dies in reverence.
Chaotic antithesis described in a book as salvation,
Denying the image of a god
That no longer deserves being adored,
Sculptured in world that forgot to be buried.