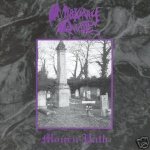 Album rating :  75 / 100
Votes :  1
1. Into The Catacomba (6:39)
Three men are going down into the sepolcreto
One of them lies by days into the coffin
He is receiting the prayers for the dead
Surrounded himself by the breeze of death
Wrapped in sudaria in a state pseudo-cadaverical
Funeral vestements are their mortuary clothes

Expiation made before the consultation
Magician precept, officiator of the rite
Sacrifice, appearing the manes of the dead

Walking down, along the corridor - Look around, and see a lot of tombstones
Light names and old images - Gloomy place, receiving relations in tears