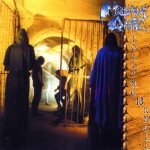 Album rating :  80 / 100
Votes :  1
5. Laylah (7:47)
Laylah impose her event, creatures from the depths unconscious possessed.
She is mother among the mothers, Layla the courtesan disturbing the partorient.
Layla the name of night. Laylah hypnotized tonight.
Awaken in the middle of the night, what have you seen? Shades in movement on the wall.
Flash through the window, pallid face, pf woman with a crown of thorns.
She awaits beside the bed while you're sleeping you dream she,
suddenly awakening from a nightmare, is what she wants.
She's your nightmare, your succubus.
One half hour of silence and calm, tower bell with waning moon background.
Tolling of a bell in the dead of night, but there is nobody inside the church.
Wings made of wind slowly slowly daze, reddish thin fog aura of the moon.
Leave this charm unwind tonight, sylphes on somnambulist's shoulder take themselves.
Laughing and make fun.