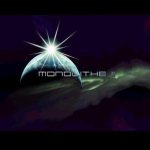 Album rating :  86 / 100
Votes :  1
1. Monolithe II (50:27)
As it grows through the ages,
Subconsciously playing against itself
Until the scale has balanced to
The back of the wrong side
It slowly leaves its small cage for a bigger one

Everything was so planned

This friendly evening light is no more...
The contaminated cradle has been left further behind

It was a wrong choice if there was any other
Observation and guidance for and from aeons,
Where a single quark's journey didn't yet get to an end

Over the threshold of the Monolith
Where knowledge equals ignorance
Where everything once belonged
Where time is forever...
Where even nothingness has no shape

Existence could have another meaning now
It would anyway all end the same,
The edges are close, mouth open to swallow it all
A sole drapery seeds the desolate fields of the bounds

Floating weak on the alien rock, no possible focus
Standing, beautiful in a morning sun
It was the meaning of everything...