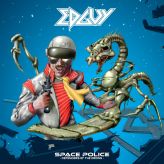 People's backstreet ways fall into place
Tokens to be found
They track down lies, antagonize the decoy

„Make your choice!“
They wanna make you raise your voice to fight for a change
It's always the same
And what if this life is feeling like a world of bliss to you
And you don't feel like going against the grain today

Backstreet ways – into place!
Tokens to be found
Track down lies, antagonize the decoy

They chase down grief to wallow in and make believe
You ain't gonna win whatever way:
We're all gonna die
Mean and sly
And somewhere in between there's life they say
But if we're not made to overshadow black?

I believe
Don't think you'll ever see them with your naked eye
And they're tired of showing off on demand
They are shadow eaters
I believe although we never see them
Cause they fly from reason
Tiny but forceful
I tell you, hmm, those shadow eaters