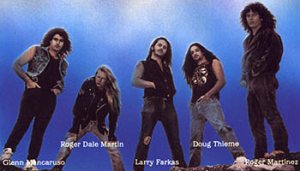 Vengeance Rising encountered financial problems after the disappointing (in ticket sales) 'Once Dead' tour. This ultimately lead to everyone leaving and forming Die Happy except for Roger Martinez who got some other players and kept Vengeance Rising going for a little longer. Eventually Roger renounced his Christian beliefs (partly due to his anger with people involved with Vengeance Rising who later turned their backs on him), and turned to Atheism and/or Satanism. He reformed the band to create new anti-Christian music, but has struggled to maintain a stable lineup or record.

2004: The line-up from the two first albums, minus Roger Martinez, did a reunion show under the name Once Dead at the Summer Madness in the end of August. The vocalist for this show was Scott Waters from Ultimatum. They released the live DVD Return with a Vengeance (2005/Roxx Productions)

After the September 11, 2001 attacks occurred, Martinez offered free albums from his website for military personnel to encourage a "holy war against Christians".