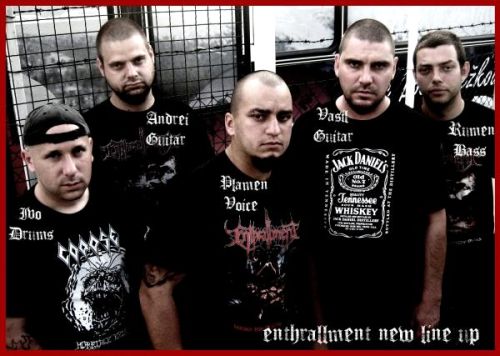 
Enthrallment is an European death metal band started in 1998.The first members of the band are Ivo Ivanov – drums, Chris Hristov - guitar, Simeon Totev - bass, Yasen Kianov - vocals. With these members in 1999 the band recorded their first release – “The scarlet difference" (demo), which includes 5 songs created by them. The demo is broadcasted by the labels- “Dark Mist Productions” and “Brutallica Records Records”. The song “Chronograph of Disorder” is included in Brutallica Records's compilation, which has a worldwide distribution. Soon after this, the band starts its concert activity within the borders of Bulgaria. In 2001 the band enters the studio to record a maxi single of 4 songs entitled Burning Fields. The bass guitar player and the vocals are replaced. The new bass player is Dimitar Tomov and the new vocalist is Plamen Bakardzhiev .The maxi single is recorded in Sound Max Studio and is released by Butchery Music. The song Graveyard is included in Brutallica Records's compilation. In 2002 Enthrallment releases a split with the Swedish death metal band Relentless. The split includes the songs of the maxi single. Extreme Sound Productions release the split in collaboration with Butchery Music. In 2004 Enthrallment have their first concerts outside Bulgaria, in the neighbouring countries. In this period the bass player Dimitar Tomov is replaced by Lachezar Todorov. The band make their own concerts in Bucharest, Skopje and plays on the two-day festival “Hellhammer” in Panchevo near Beograd, Serbia. The headliners of the fest were Hypnos. The number of people attended that festival is astonishing .The clubs are overcrowded. In the beginning of 2005 the band enters the studio" Basement: and record their first album -"Smashed Brain Collection" -which includes 9 songs .The English label "Grindethic Records "releases the album in collaboration with the Spanish label "Grotesque Productions". The band records two video clips to the songs "Awaiting the death" and "Total Zombie Domination". As a bonus, the first video clip is included in the release plus a 20 minute live performance from the album's promotion. The responses to the album in various reviews are very good. In 2006 the guitar player Vasil Furnigov and the young bass player Martin Naydenov join the band. In this period Enthrallment plays on the same stage with bands such as Obituary, Sinister, Napalm Death, Destruction, Mystic Circle...In 2007 Enthrallment goes on a tour with Malevolent Creation, Rotting Christ and Rotten Sound ,organized by the Polish agency "Massive Music". Enthrallment has concerts in Romania, Austria, France, Spain and Portugal. As soon as the tour is over Enthrallment starts to record their new album again in" Basement Studio". In 2008 the album "Immerse into Bloody Bliss "comes out under the Slovakian label "Metal Age Productions". The band records their 3rd video clip for the song "Cane the messiah with the crook". In 2009 the band has a number of concerts on the Balkans where they share a stage with Dead Infection, Vital Remains … In 2010 Enthrallment are on their own European tour organized by Mika Productions (Germany) and Metal Bands Booking (Bulgaria). The tour includes countries such as: Serbia, Slovakia, Czech Republic, Poland, Germany, Slovenia, Bosnia and Herzegovina, Macedonia. On this tour Chris Hristov is replaced by the guest guitar player Andrey Gegov. After the end of the tour Enthrallment has two concerts with Deicide in Sofia and Bucharest.
Contributors to this artist