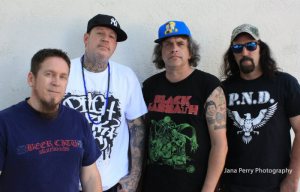 D.R.I. Photos (2)
Additional notes
D.R.I. are considered by many to be "the fathers of crossover thrash" along with Suicidal Tendencies, Stormtroopers of Death, M.O.D., Excel and Beowülf. The genre "crossover" was also coined from their 1987 album which basically sums up the sound of the thrash metal/hardcore punk hybrid.

Evolving out of a defunct hardcore band called the Suburbanites. Singer Kurt Brecht, drummer Eric Brecht (his brother), and bassist Dennis Johnson had all played in that outfit, and with new guitarist Spike Cassidy in tow, they renamed themselves Dirty Rotten Imbeciles, after a frequent insult from the Brechts' father (who objected vehemently to their rehearsals). Started out as a hardcore punk band, then got thrashier and thrashier.

D.R.I. are considered one the first bands to use the blast beat with their song "No Sense!" from their "Dirty Rotten EP."

Being one of the first crossover bands and first few hardcore acts to have acclaimed recognition from some mainstream light, D.R.I. have suffered a lot of heavy criticism from other hardcore punk bands like Sore Throat, Electro Hippies, and so on.

Although D.R.I. haven't released new material since the 90's, they have never actually broken up. The band still tours and performs on occasions. They went on hiatus for a while (from 2006 to 2009) when Spike Cassidy was diagnosed with cancer and he's been recovered since.
Contributors to this artist