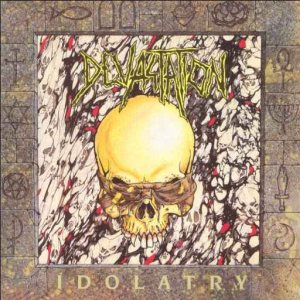 All songs written and arranged by Burk and Elizondo, except "Idolatry" by Burk, Elizondo and Dunsmore. All lyrics by Dunsmore.

Reissued on vinyl by Forged in Fire (Rockadrome) on November 17, 2008 with the new cover art but without the newly recorded bonus tracks. Limited to 400 copies on black vinyl, 300 on picture disc, and 100 on clear yellow vinyl. ... See More

I was writing a long-ass review on this album, but it got scrapped in the end. Anyways, this is some really impressive Brutal Thrash Metal work here. I've been listening to this album a lot for the last few days. The whole album sounds like it's straight out from Death Angel's studio album, or Slayer's secret project that explores Kerry King's deep, undisclosed love for less harsh vocals.

The guitars make up over half of the brutality in this album while the drums are a bit weak. The riffs they came up with there are top-notch and sometimes insanely good. Forsaken Hatred, Idolatry and Subconcious have some really clever and fresh riffs, which is pretty neato! Overall production quality? Muddy but not grainy. It all comes up to an album worth collecting.

+ This album is really religious. It doesn't actually pinpoint one specific religion as it features symbols of multiple Abrahamic religions on the album cover. I am really not sure if they're a Christian band, and if the lyrics are supposed to be pro-Christian ("you worship satan prepare to die") or just tongue-in-cheek. Afterall, killing someone who worships Satan isn't very Christian of someone.