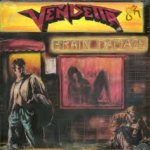 Album rating :  88.3 / 100
Votes :  3
8. Dominance Of Violence (3:30)
Violence in the fight for independence.
Attempts in a trance of high reaction.
Tragedies by handymen of death, extreme radicals, militants.
There's no surrender in the fight against the rules.
Death's to change the structure of society.
Straight ahead leads the way of your beliefs.
Terror, rage and energy for liberty.

But DEATH and TERROR cannot be my decision.
YOU ARE NO BETTER than the crazy fuckin' politicians.

Maybe your ideology is the best and only solution.
Fighting for equality gives you the right to execution?
It's hard fight, is it a good fight?
Is there any other way to liberty?
Intensity, brutality in this static institution that we call "Our State".

TERROR cannot be my decision.
YOU ARE NO BETTER than the crazy fuckin' politicians.