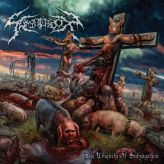 Album rating :  91.2 / 100
Votes :  5
4. Pfiesteria Piscicida
Track rating :  100 / 100       Votes :  1       [ Rating detail ]
A Kiss from the hog one thousand times more potent than cyanide, biohazard
level three just below Ebola, surpassing that of HIV Pfiesteria Piscicida.
Virulent Micro-Organism capable of having twenty body shapes.
A toxic algal bloom, dynoflagelates dissolve still living flesh. Destined to
drown in a river of pig feces, forever treading defacation of swine species,
mass production has brought us to this. Treading the waste of pigs, tread the
waste of swine. Swim, drowned in red tides scatural disasters sweeping the face
of the earth aside.
The futures bleak, plagued with disease, bi-ped human pigs shitting where they
eat.
Epidemics, states of toxicity, this is our destiny bon appetit. Now, sulfur
clouds fill our lungs as we pretend to breathe unobstructed. Skies of brown,
oceans of gold, reflecting what we have and what we have become.
What we have become.....shit.