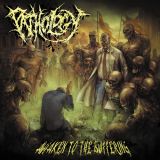 Album rating :  85 / 100
Votes :  3
5. Society's Desolation (3:02)
Track rating :  90 / 100       Votes :  1       [ Rating detail ]
As time has come to pass,
This world is collapsing in its own consumption.
We ingest & disgorge things of the purest essence to filth.
We are a flawed design,
A fucked creation.
Mother earth must reject the human fucking race.
Destruction and devastation have become necessary to our existence.
We care nothing for the things we do.
Raping the world of its resources,
The earth has become humanity's whore.
The earth is bought and sold.
Without thought of the consequences,
The human race is walking a fault line,
Towards an indefinite end.
Wake up and realize the errors of your ways.
We live in a cesspool of shit,
From which we have created.
Created by our own ignorance.
It's the price we are paying.
It's our world decaying.
Rotting & collapsing.
It's the price we are paying.
It's our world decaying.
Rotting & collapsing.
We are the excrement.
We are the greed.
We are the fear.
We are the end.