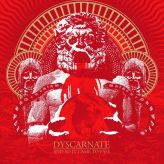 Born into a world of monotony, shielded from all deviation. bound by the shackles of

Fate. to resume all obligations put forth, led fiercely along a blackened tunnel, with
The light at the end seeming so absolute. all other routes are blocked that escalate
The track. "just follow the paragon and don't look back!”

Emerging from the light to realize the euphoria, aeons of deliberation hoping to be
True. devoting all to the promised life, but the future is distorted. no time for
Judgment-it was now or never they make us make haste yet will not conclude. total
Deadlock for the future sought. no logic, no reason, just ride the onslaught
Observing the peers, emulating their ways. wearing them down, the spirit decays
Tolerating the act to get through the fray, just do what they do, not what they say

Forced on their production line-moulded, shaped and formed. scare tactics used to
Put off any second thoughts. an archetype for greed, the evidence manifests their
Will, disguised with false freedom. deciphering the clues, no practical reason to
Comprehend. assured by the tyrants: "there will be a means to an end”. a chain
Gang of fools is all that is to be seen, living out a sentence for another selfish
Being. stamping out the dreams, engraving the mind, playing out the myth,
Forever running blind. the failure of the scrutiny shall result in everlasting misery