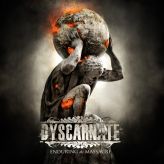 Where is the field upon which he burst; where silver fell from his clenched fist? It drips toward the gallows where a perverse trinity awaits.
The accused forever seeping scarlet dissolution, like he did on that symbol that the prosecution pointed from.
Hanging from such vicious rope, and screaming righteous agony – “He is not your Messiah
A call not heeded from outside his captor’s mandibles, within the level of his namesake, and pinned by his divine counterpart.
The creation poisoned against him prior to its inception. Honour in treachery, trust in betrayal.
Flanked by regicidal schemers, besiegers of the crown of thorns. Ensnared at the foot of their short-lived kingdom, eternally oppressed by the trinity of horns.


Surrounded then and now forever by those guilty of injustice – they who are worthy of his handle. With a name in vain (synonymous with his captor).
The one they call ‘Betrayer’ – assured by the gospel ‘truth’.

“I’m the endurer! I am the sufferer!
I’m the creator! I am the Messiah