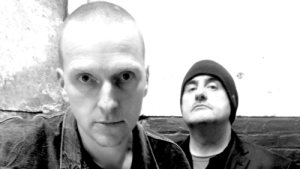 MELODEATH5632
Additional notes
Godflesh are highly regarded as one of the pioneers of industrial metal (or debated as industrial rock music); they took industrial to the next level with their fuse of heavy guitars and mixing it with slow drum loops and effects. Godflesh has influences ranging from initially Swans, Black Sabbath, Led Zeppelin and industrial music very much like Killing Joke, Throbbing Gristle and even some folk from Leonard Cohen (most of his song/album titles and some lyrics were borrowed from him).

Contrary to popular belief, Godflesh isn't grindcore or death metal; they were an experimental form of industrial metal. Their sound was constantly evolving; at times, Godflesh moved practically completely away from "metal" only to move back with the next release. All around, the "industrial" element always stuck with them.

They've been known to inspire countless bands ranging from Fear Factory, Danzig, Ministry, KoRn, Faith No More, Nine Inch Nails, even the likes of the Beastie Boys (the latter of which fomer Suicidal Tendencies drummer Amery Smith would eventually join and later leave).

At the same time, Godflesh started a new movement of music with bands mimicking a similar style to theirs, like Pitchshifter, Dead World, Scorn (early Scorn did feature Justin Broadrick on guitars), Sonic Violence, Red Harvest, and many other. Godflesh is also known to highly inspire the post hardcore/sludge genre with such bands like Isis and Pelican playing a style akin to Godflesh, just minus the industrial elements (though they are highly inspired by the sound layering and atmosphere Godflesh created).

Justin Broadrick formed this group after walking out of Napalm Death and having stints in other bands such as Head of David and Fall Of Because. He formed the band with Ben "GC" Green, a partnership which is seen as being the definitive essence of Godflesh. Justin saw this project as a "renaming" of the last band Fall Of Because (changing from that name to Godflesh).

The meaning of the name Godflesh as explained by Justin: "I heard someone once say that 'music is the voice of God.' In that sense, it's something that can get inside of you and move you spiritually on a communication level. The word God conjures something immense and inconceivable. The 'flesh' part is what effects you on a physical level. Our music is loud and destructive. Like Godflesh is the American Indian term for peyote, but that really is kind of a coincidence. It's a coincidence that suits me just fine though."

Most of Godflesh's cover artwork comes from movie stills, freeze frames and magazine artwork. Check their official website for descriptions and explanations behind the covers (go to the "artwork" section.)

Justin Broadrick's newest project is Jesu, named after the last song on the Godflesh's last studio album 'Hymns'. Other than this, Justin has been involved in many other projects, most largely encompassing techno, dub and electronica - elements of which were always present in Godflesh - such as Curse Of The Golden Vampire.

Justin Broadrick disbanded Godflesh in early 2002 after coming to the conclusion that the band just wasn't itself without his founding partner, Ben 'GC' Green. Ben left the group due to conflicting differences.

Kirk Hammett of Metallica fame has been a huge fan of Godflesh for a long time. He has described the band as "the heaviest band in existance." Though, both parties have had controversies. Metallica's album cover for "Load" featured a freeze frame from the Godflesh music video for "Crush My Soul" off of the album "Selfless". Justin showed the music video to Kirk. Kirk decided that a specific scene in that music video would be a perfect cover art for the Load album, and, in interviews, Kirk never mentioned the fact that the cover art came from a Godflesh video.

Danzig and Faith No More both once asked Justin to join their band's full time.
Contributors to this artist