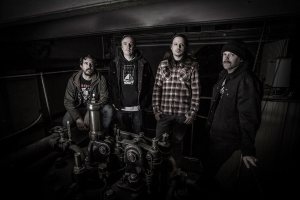 Additional notes
In 1997, William Blackmon's old hardcore band Abegail had a side-project called Gadget where the members just switched instruments and played powerviolence/fastcore (William handled the vocals). The band recorded one demo before they (and Abigail) split up. During 1998, William formed a new grindcore band called Leviathan together with soon-to-be Gadget vocalist Emil and two other friends. That short-lived band also split up just after they recorded their only demo. In late 1999, William started a new grindcore project and reused the name Gadget.

The intentions were to do everything by himself but he soon realised that it was too demanding (and boring) to do it all on his own, so he recruited guitarist Rikard Olsson after just a few months. As a duo, the band wrote ten songs and recorded their first demo during a week in February 2000. They both handled guitar and bass duties and William took care of the vocals and drums, as they couldn't find a suitable drummer yet.