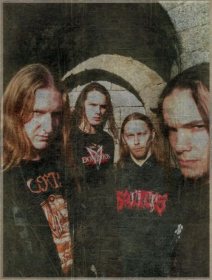 Additional notes
According to Metalfan.nl, Maarten "Ploegbaas" Luijsterburg took his own life on Tuesday, October 24 by leaping in front of a train. He was 25 years old.

In a posting in the guestbook section of BRUTUS' official web site, the band confirmed Luysterburg's passing, stating that "the weight of the world motivated him throughout his life but in the end got the best of him." Maarten was said to be very focused on his mental recovery during the last couple of months and had a lot of things to do in life, which made this turn of events even more shocking for those close to him.
Kingdom
Album Reviews
Album Comments
Track Ratings
Album Photos
Lists
Lyrics
Artist Photos
Kingdom Polls
Advanced Search
Info / Statistics
Notice
Users : 17,746
Site Status
Online
Artists : 39,360
Reviews : 9,403
Albums : 142,460
Lyrics : 190,455
The Best Metal Albums of 1991
1.
Death – Human
2.
Suffocation – Effigy of the Forgotten
3.
Skid Row – Slave to the Grind
4.
Guns N' Roses – Use Your Illusion II
5.
Sepultura – Arise
6.
Autopsy – Mental Funeral
7.
Metallica – Metallica
8.
Carcass – Necroticism - Descanting the Insalubrious
9.
Savatage – Streets: A Rock Opera
10.
Guns N' Roses – Use Your Illusion I