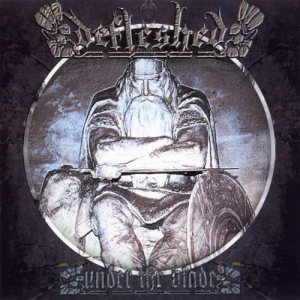 Under the Blade Information

This album was released in the US through Metal Blade Records.
It was later re-released as digipack & remastered by Hammerheart Records.

Bonus tracks for the re-release
Live tracks recorded at Fellini, Uppsala, Sweden, on 13/2/1998.
12. Entering My Yesterdays
13. Metallic Warlust
14. Under The Blade
15. Walking the Moons of Mars
16. Thorns of a Black Rose

Sepultura cover:
17. Beneath the Remains

Do NOT change the cover art on this album. This is the original art as released by Invasion Records. The Karmaggedon Media re-release features different artwork, but not original. ... See More