The Math of the Myth Lyrics 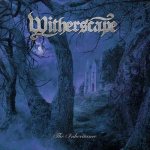 If ever he arrives, he could still believe
And no one here will tell, and he will never die here
The sounds of the night, clawing at his heart
Telling him to run, never gonna leave here

Calculate the numbers, struggle through the night
Try to prove the ancient folk tale, she'll never let him see

He's telling her to try, never to believe
And no one else but him, never gonna cry here
A demon of the night, she'll never see the right
He doesn't wanna go

Free him from her
Long yields pass into the light
Don't run from me
Like a future on the brink tonight
Eight years from now
All the living has to pay the price
Surround with fear, your death day

There hands are disfigured, fingers branch like dead trees
He believes she's a demon, he believes in the witch

He can see in the darkness, her eyes staring him down
Peering in through windows, stalking, from the ides of time

Forever to believe, never he'll deceive
And he won't even try, never gonna die here
Even when she's gone, he will never know
No one will ever tell, never lie here for her