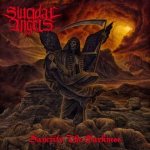 An atheist, a sinner, I refuse to obey
I follow my own path, I will never pray
Divinity and Trinity, what a bunch of crap
They won't stand a chance, I elude their trap

War and blood upon me, I have come to fight
I will give them hell, I will stand in pride
Misery and apathy will come at an end
They won't last a minute, I will see them dead

The slaughtering of millions, I will not forget
Heathens turn or die, what else to expect?
I will burg your bloody Cross, I will never fall
I'll defend my freedom, I am standing tall