Let Them Rest in Peace Lyrics 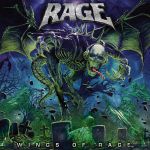 Those who claim that they can lead :
it's their nature that they don't respect a single human life.
Still they tread them when you bleed.
They collect the bodies, everyone must die.

They were some mother's son ...

Godless bloodbath No more
Let them rest in peace
One by one, dead and gone, on and on again...
Music Video